Many children have a natural interest in collecting items, and it’s common for parents to want to share interests of their own. Collecting coins is a great way to learn about history while developing patience and even understanding the value of money. Here are some simple ways to get kids interested in coin collecting.

Although coin collecting is a rewarding hobby, children may get frustrated by the scarcity of certain coins. To avoid them getting discouraged too quickly, start them off with small, manageable collections at a beginner level. Whether it’s collecting Lincoln pennies or all 50 state quarters, be sure to start small and stay encouraging. In time, they will learn the valuable lesson that the enjoyment of coin collecting comes from the search! Later, they can begin searching for more rare coins such as silver coins that are still being circulated and could be sold for cash. 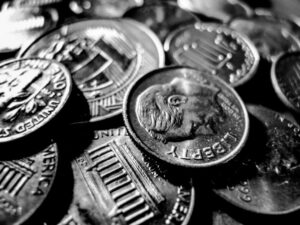 It’s common for young children to pick up on their parents’ interests naturally. However, some parents may assume that coin collecting might not be interesting to their children. One of the best ways to get children interested in coin collecting is to simply be vocally passionate about the past-time, sharing new finds, exciting coin sales, and even news from the community. When children can witness this passion without being forced to join in, they may naturally gravitate toward the hobby and want to follow in their parents’ footsteps.

Many believe that coin collecting is an entirely solitary experience, which may be off-putting for children. However, this misconception couldn’t be any further from the truth. Show them the social side of coin collecting by taking a trip to a local coin shop, coin show, or even any museums where coins are displayed. This way, they can meet and chat with other coin collectors alongside their parents.

Coin collecting is a great way for parents and children to share an interest, and it can also be quite profitable in the long run. If you or your little one are interested in starting or expanding a collection, or you have coins that may be of value, visit Fair Oaks Coin & Bullion today or contact us at 916-965-1789.